The inadequacy of gender is in center when Nielsen occupies CaféTeatret. Karen Blixen is the focal point of a transformation that originates in a showdown with the man and an exploration of the woman as the potential of the future.

Nielsen is in figure of the narrator Baroness Blixen initiating a mysterious tale with Nielsen’s body as a piece of test material that is made available for a gender transformation. Nielsen leads us through a performance about the freedom to be different from everybody else – and putting yourself to risk. Medea, Ofelia and Antigone all take part in the transformation and in the middle of it all Michael Jackson makes his entry.

THE TRANSFORMER begins as an exhibition in an art gallery and from there it sets out on a journey through the art forms. Sound art, concert, poetry recitation, installation, performance, theater and dance – THE TRANSFORMER contains a bit of it all but it is though refraining from maintaining a permanent form.

Working as an author, dramatist, performer, instructor and a musician Claus Beck-Nielsen has established himself as one of Denmark’s greatest artists. Since the staging of his own death in 2001, he has wandered through the world’s hot spots and created activistic artworks in USA, Afghanistan, Iraq and most recently Ukraine. In 2011 he was accused of identity theft by his previous partner and today he is known as Nielsen.

With the nomination for Nordic Council’s Literature Prize 2014 under his previous name, Claus Beck-Nielsen, Nielsen still exists in the borderland between identities. Now the artist returns to the public in shape of Karen Blixen.

Further information about Nielsen on Nielsen.re.

Sound
Listen to the radioactive sound emissions on SoundCloud. 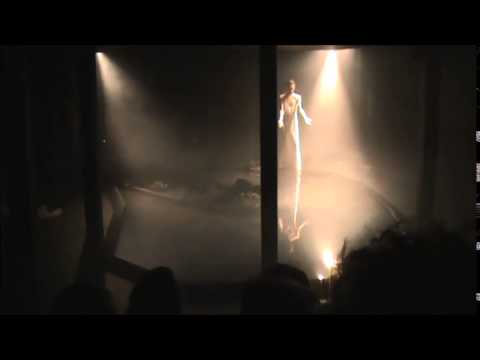